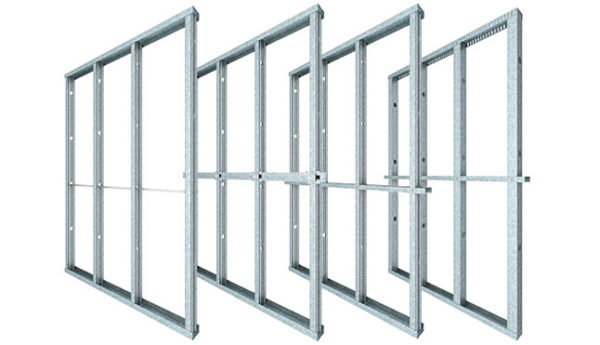 Designed to be not only stronger, but safer, the range of Hemmed Stud and Track sections help reduce handling injuries on site. The hemmed return lip increases rigidity, preventing unwanted rotation as well as eliminating sharp edges.

The vertical rib in the stud face allows the wall linings to be placed centrally, ensuring easier and faster fixing, while the deeper knurling provides better screw location and retention. What’s more, the studs lock perfectly into each other, creating the best boxed stud profile in the market.

Rondo 0.50bmt, 0.55bmt and 0.75bmt Wall Studs have bell mouthed service holes. Being bell mouthed with no protruding sharp edges eliminates the need for fitting grommets for electrical cabling. Punched round holes are processed at designated centres along the 1.15bmt Wall Studs.

Below are more of the range of systems in the range:

When it comes to selecting a Nogging for your internal wall framing, we have the greatest range available and each of them have been designed to suit a specific application.

We have Noggings that can be installed during the steel stud framing, such as the continuous Nogging Track that can be fitted to the stud framing in one length and Double-Punched Nogging Track that suits a wider Stud arrangement such as boxed Studs, or the DUPLEX Stud® and MAXIjamb® Studs. We also have two new innovative Noggings that are providing a whole new way of framing as they can be installed after the stud framing is complete.

The SNAP-LOCK Nogging® is a spacer bar that is designed to snap perfectly into Rondo light gauge Steel Studs after framing is complete, making installations quicker and resulting in labour cost savings. The FAST-FIX Nogging® suits any typical Stud application, whether its boxed, back to back or staggered stud. FAST-FIX Nogging® can also be used with DUPLEX® and QUIET STUD® Stud profiles.

The availability of various sizes, complementary components such as nogging tracks, curved tracks and special cleats ensure Rondo Stud and Track Wall Systems are available to suit almost all situations, such as internal drywall partitions up to 10 metres in height, depending on the application.

What you’ll like about the Steel Stud and Track Wall Framing System:

What is the Rondo Steel Stud and Track Wall Framing System suitable for:

PROUD SUPPORTERS, STOCKISTS AND SUPPLIERS OF